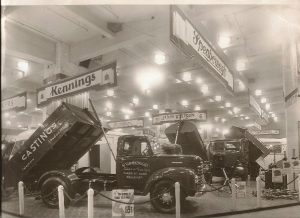 Spenborough Engineering was founded around 1913 in Heckmondwike by the grandfather of the current director, John Stead. The business progressed from selling and manufacturing engineering equipment to include the repair and maintenance of commercial vehicles and associated bodywork. The manufacture of screw type tipping mechanisms in the inter-war period was gradually being overtaken by the introduction of hydraulic rams and tipping gear and in fact became the main thrust of the business which expanded rapidly, producing rams and valves for the booming industrial and agricultural sectors. 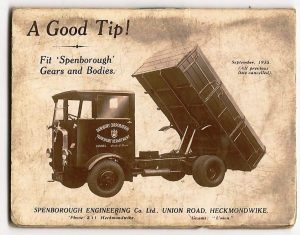 The business expanded during the 2nd World War as it was re-tooled to produce mortar bomb casings. Following the war customers included Joe Bamford whose early models of JCB were all powered by Spenborough rams and controlled with Spenborough valves. At the same time the export markets of the booming Commonwealth countries such as Canada and Australia were being supplied. South Africa was also a major market at this time.

The Company suffered during the 70’s and 80’s as its export markets disappeared with the loss of Commonwealth preferential tariffs and increasingly difficult domestic markets which culminated in the closure of the business in 1985 following the collapse of a major customer, The Acrow Group, manufacturer of Coles Cranes.

In 1986 the Company was re-introduced by Mr John Stead as a specialised commercial vehicle bodybuilder with particular emphasis on tipping bodywork and later the supply and fitment of lorry mounted cranes.

In 1996 the Company re-located to a purpose-built factory in Ravensthorpe, Dewsbury. This factory underwent a further expansion with an additional workbay being completed in the early part of 2008 and in house paint facilities were installed in the Summer of 2008 to ensure a consistently high standard of paint finish is achieved.

In 2018 we extended our purpose-built factory so we can meet our customers needs. This building provides a high quality working environment for all our employees.

You currently have JavaScript disabled!